PSERS Special Early Retirement: How You Can Retire Early and Boost Your Pension

Are you thinking about retiring early from PSERS? If so, you are not alone. Many teachers, administrators, coaches, district office staff and Intermediate Unit employees are considering retiring earlier than originally planned. Whatever the motivation, the same big question is usually asked- Can I retire before reaching Normal Retirement and how does it impact my pension?

This article is going to help you understand what Early Retirement means and how you might qualify for PSERS Special Early Retirement. Before we go too much further, let’s review what we mean by Normal Retirement and how to qualify.

How do I qualify for Normal Retirement?

Normal Retirement means that you have achieved certain milestones during your PSERS service which qualify you for a full pension benefit. These milestones are different for the various PSERS members classes.

Class T-C and T-D members can qualify for Normal Retirement by reaching:

Class T-E and T-F members can qualify for Normal Retirement by reaching:

If you do not have a recent statement, you can access it by logging into your PSERS Member Self-Service portal here.

If you are thinking about stopping work before reaching Normal Retirement, learn everything you need to know about retiring early here.

How does retiring early impact my pension?

Retiring before reaching Normal Retirement means that your monthly pension will be reduced. The amount that it is reduced depends on how many years away you are from the age and service milestones listed above. In general, the younger you are and fewer years you have of PSERS service, the lower your pension will be at retirement.

When retiring early, your pension will likely be reduced by 4 -7% for each year that you are away from Normal Retirement. For example, a class T-C member who is 58 years old with 28 years of PSERS service would be two years from achieving Normal Retirement. Reaching age 60 with at least 30 years of service is a qualifying milestone for normal retirement.

Another example is a class T-C member who is 60 years old with 25 years of service would have two years yet before reaching Normal Retirement. In two years, they will be 62 which automatically qualifies them if they have one year of service.

No one wants their pension to be lower. Many PSERS members retiring early have worked for 25 years or more and have earned every dollar of their pension. The good news is PSERS created a retirement qualification with these members in mind called Special Early Retirement.

What is PSERS Special Early Retirement?

If you are age 55 or over with at least 25 years of service, you could qualify for PSERS Special Early Retirement. You may find this retirement status referred to as “Special 55/25”.

The main benefit is that your pension is reduced by a lower amount than if you were simply retiring early. If you qualify, your pension will be reduced by 0.25% for each month you have left before reaching normal retirement. This means a 3% pension reduction (0.25% x 12 months) for retiring a full year early which is much better for you than the 4-7% yearly reduction for early retirement.

PSERS Special Early Retirement can be a happy middle ground

Many soon-to-be PSERS retirees ask themselves these questions as they explore their retirement choices. It can be difficult to make these big decisions when you want as high a pension as possible but also want to retire and move on.

PSERS members who retire before age 55 but who have reached 25 years of service will not qualify for Special Early Retirement. However, there is a strategy to consider that could provide a major long-term boost to your pension. Let’s use an example to illustrate this strategy.

John is 54 and retiring from PSERS. He simply doesn’t want to work anymore. He has 25 years of credited service but, because he is only 54, he will be considered retiring early. This means his pension will be reduced. However, there is something that John can do with proper planning. John could retire and elect to defer his pension payments until he reaches age 55. At that time, he will have reached both the age and service milestones needed to qualify for Special Early Retirement. He can then start his pension payments which will be higher for life.

In John’s case, careful planning comes into play so he can supplement his monthly income from the time he retires until he reaches 55 and starts his pension payments. This could mean that he works another job, lives off of other money or reduces his expenses during that time. While this strategy may not be possible for everyone, deferring pension payments until qualifying for PSERS Special Early Retirement should be a consideration by anyone who comes close to the age milestone at retirement.

What should I do next?

If you want to see how working a few more years to qualify for PSERS Special Early Retirement or Normal Retirement benefits you, check out the PSERS benefit calculator. This tool allows you to run retirement scenarios and learn how different retirement ages and years of service change your pension. All you need to get started is your most recent PSERS Statement of Account.

Do you want help considering all of your retirement options? Schedule a Retirement Readiness Call with a TeachersRetire team member to get the answers you need to move ahead.

Master your PSERS retirement with the 2022-2023 Retirement Toolkit

If you're thinking about retiring at the end of the 2022-2023 school year, there is a lot you need to do. You need to choose a pension option, decide on your PSERS lump sum, figure out health insurance coverage, and get your financial ducks in a row. You probably want to make sure that retiring this year is a good decision in the first place too.

You don't have to do this on your own. We've made it easy by packaging everything you need to know into one simple PDF. Claim your FREE copy and master your PSERS retirement!2
Claim My Copy!

Check out our most popular articles! 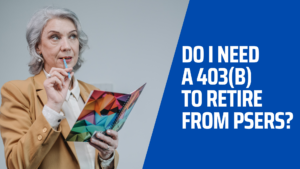 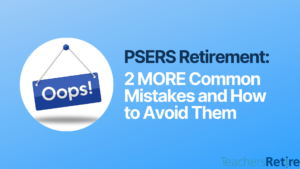 PSERS Retirement: 2 MORE Common Mistakes and How to Avoid Them 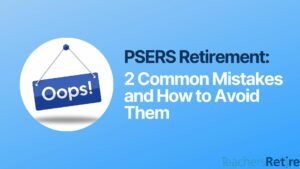 PSERS Retirement: 2 Common Mistakes and How to Avoid Them